On to Spain! The Campaign Season Begins!

It has been said by many much wiser than I, that no plan survives the first contact with the enemy. I think the same could be said for wargame rules. It's been my experience that gamers almost without exception  tinker with rules and rule sets after the first game or even reading. I am no different!

Although it's been several months since my last post on this blog, I haven't been idly puttering away. On the contrary, I've been painting, mounting, and playing with my 54's. Of course, most of the time it has been solo play as the pandemic continues (although it seems to be abating here in New England). In a recent video conference with members of my club, the consensus was that maybe by the end of April, when all of our members should be vaccinated, we just might be able to get together for a game. But getting back to my point...

I have been play testing Dirk Donvil's About Bonaparte rules for large 54mm Napoleonic battles. While I like the mechanics and play, there were (are) some things I have changed based on comments both from Dirk, my friend Ross, and of course my own observations. Likewise, I have been reading Neil Thomas' Napoleonic Wargaming and have adopted several of his ideas. 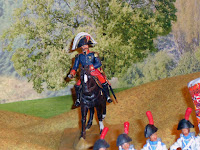 So what's new? Well, I'll go into more detail in an upcoming post (I actually have several all lined up for final editing!) but the most obvious change is the basing. Now, I have been been brought up on rectangular bases for Napoleonics since, well, since Napoleon was a corporal. About Bonaparte uses a 55mm x 55mm base for infantry, 55mm x 110mm for cavalry, and 110mm x 110mm for artillery. My Anglo-American Armies for the War of 1812 were based that way in my early test games previously posted. Even using half bases for skirmisher, it just didn't look right to me. So I opted for 3" x 1.5" base for infantry. I didn't change the cavalry, and ignored basing for the artillery altogether. I just think it looks better, an doesn't seem to impact the game at all. I also ignored or modified the national characteristics for the various armies given in the rule book.  The actual mechanics of the rules were pretty much retained (subject to further play test, of course). 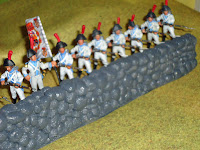 We'll finish up today with some photos of my Spanish forces. I've already written about the modifications I made to come up with the infantry. The artillery and dragoons started as Armies in Plastic American Revolution artillerists and cavalry. Careful trimming of the tricorns, along with a plume, give a pretty good facsimile of those Spanish troops.

Posted by Alan Coughlin at 3:53 PM