In the my last posting,  I reviewed different figures for the AWI in 54mm. Today i would like to take a brief look at the artillery that is available and which is suitable for both the AWI as wall as the SYW and Napoleonic era. Since I've already reviewed the figures offered by these companies, I'll stick to the gun models. I'm also going to show just the painted models leaving you to imagine the same in shiny plastic of various hues.

The first of pictures are models from the Armies in Plastic line. These are the most readily available and have enough variety of type to be a very useful addition to your forces. All of the sets have a five or six man crew. 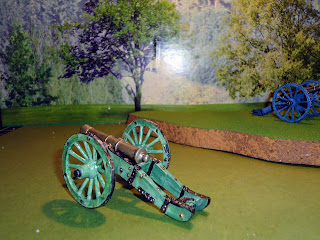 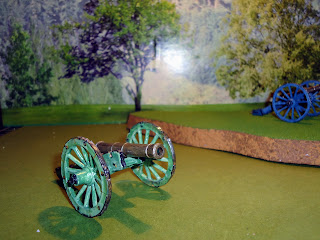 This is a fairly good representation of a French 8-pounder. It's painted in Foundry Miniatures "French Gun Olive Green" triad (# 109). The set also comes with a medium howitzer or light gun barrels. 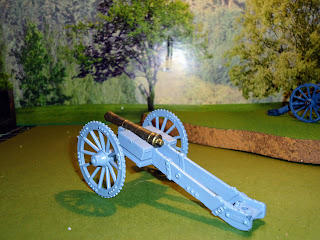 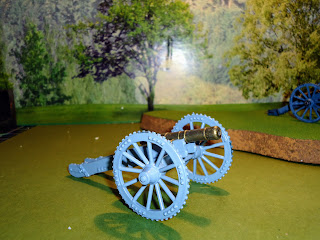 Here's another AIP offering (above). This, to me, would be more representative of AWI guns, either 4 or 6 pounders. These are also painted in Foundry colors, in this case "British Gun Grey" (#108). 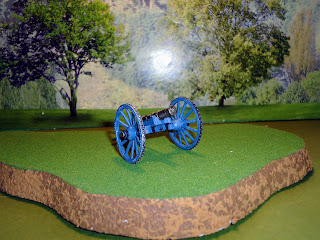 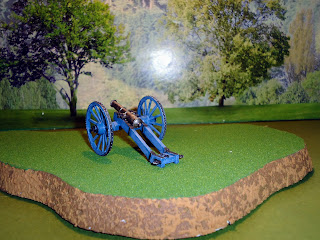 This last is from IMEX British Artillery Set (#710). The American Artillery Set (#711) contains the same carriage but a light howitzer barrel. Interesting enough, the crew figures are different in each set. They could be painted as pretty much either British, Hessian, or American. All of them are well sculpted. I have some pictures of both the AIP and IMEX artillerymen in an earlier post on this blog.

The carriage is painted in Foundry's "French Hussar Sky Blue" (#76). The bronze barrels on all the models was Foundry's "Bronze Barrel" (#103).

In my next installment, we'll put this altogether with a AWI battle report using a scenario from Neil Thomas' One Hour Wargames and a variation of the classic Charge! rules. Until then, thank you for your reads and comments.

Recruiting a 54mm Army (Part 3)
or, Build an Army and They Will Come

In my last entry I gave an overview of one of the major sources of plastic 54mm figures, namely Armies in Plastic (AIP). Today I am going to focus on three other manufacturers: Accurate Figures Company, A Call to Arms, and BMC. Most of these can be readily found online and in some of the better stocked hobby shops. Check around for prices because these can vary. 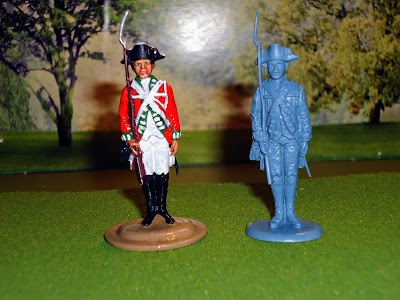 Accurate Figures produces an excellent range of 54mm American Revolutionary War troops. These are from the British Army series, but could easily be painted as well-dressed Continentals. The plastic is somewhat more rigid than than found in AIP figures and I think this makes them both easier to prep and paint. The molded detail, as you can see, is excellent. They also offer American Militia, and of course these can be used for either side. There are twenty figures to a box, two sprues of ten. 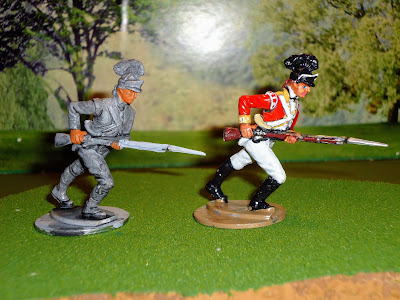 A Call to Arms is a British made line of figures, comparable both in quality and detail as the ones above.  Pictured is a British Light Infantryman, one of sixteen per box. There are four sprues, each having the same four poses. If anything, they are physically a bit slighter than either the AIP or Accurate Figures, but blend in nicely on the tabletop. They also offer British Grenadiers and Maryland Continental Infantry. All are well-done. The Maryland troops particularly interesting because they have a number of different uniforms ranging from standard regimental sets and tricorns, to hunting shirts, to a curious cap that reminds me of a cap worn by the 2nd Canadian or Butler's Rangers. 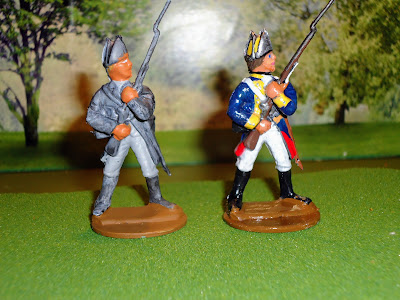 BMC is the last one we'll look at today. These are sold primarily as playsets. This Fusilier comes from the Yorktown one. They are meant to be toys, and are detailed and priced accordingly. The features are simple and barely raised. It really requires a decent paint job to do them any justice. Personally, although these Hessians aren't too bad, the Contiental/French standard infantry will not likely be seen in any game I might put on. The heads of the figures are oversized and the arms seem way too short. But, they are cheap!

I'll finish up today with the three together (apparently the RSM has other ideas for these lads). Next time I'll talk about the available artillery, "customizing" AIP cavalry, and how to make movement trays, like the ones below. 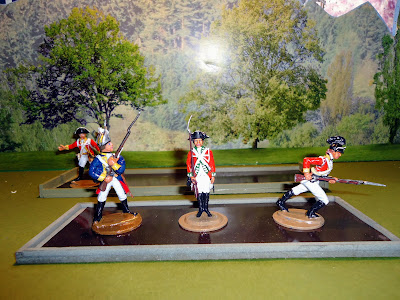 Posted by Alan Coughlin at 7:01 PM No comments: