It is hard to believe it's been six months since I last posted anything. I must confess it has been a busy summer and early fall with several trips both here and abroad, the most notable a two-week cruise in the Mediterranean: Malta, Rhodes, Crete, Sicily, Greece, Italy, and several Greek islands. As interesting as they were, it was tiring: my fitness tracker indicated that we walked nearly forty miles (mostly uphill both ways, it seemed) over the course of the 12 days.

I also have seen and learned more about Venetian and Maltese fortifications, as well as ancient ruins,  then I could possibly imagine (or care). Our guides were very knowledgeable, albeit a bit pedantic. Here's a picture taken in Malta: 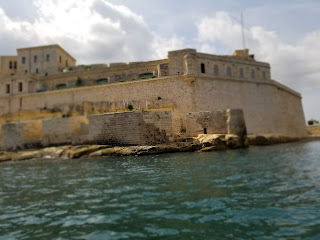 Well, golf season is also winding down, Halloween is around the corner, closely followed by Veterans' Day, Thanksgiving, Christmas, New Year's, and perhaps one or two I have forgotten. So, we retreat to the hobby room; there are Saxons, Franconians, Swabians, and a host of others to paint, base, and organize.

As I mentioned in my last post, the old idea of a mythical campaign based on the equally mythical War of Franconian Succession (very loosely based on the actual, and mostly forgotten, War of Bavarian Succession), reappeared. The most daunting task was the rules. I've done a number of games using the classic Charge! rules, but the large numbers of figures per unit was a bit daunting.

Enter another set I've used, designed for 54's, called All the King's Men by Ken Cliffe. Unfortunately, he is no longer in business, but there is still a Facebook page, so perhaps copies can still be obtained. They are fast moving, with lots of dice, and a lot of fun. Since the units are usually 8 to 14 figures, the painting aspect is more manageable. Indeed, as the Franconians (and Hessians) wore a Prussian style uniform, a simple change in the unit standard will suffice. So, I can say with some assurance, the Franconian army is pretty much complete.