Recently in a tongue-in-cheek response to a comment from an old friend who referred to 54's as an "old guy scale", I pointed out not only the advantages of being an old guy (Dave is probably 20 years younger than I am, and I'm heading for the big 70 in a less than acouple of years). Chief among them is to be fully comfortable in your own persona. It's not likely you'll have to impress others, and it's unlikely you would anyway. Better still is that if you are fortunate enough, and many of us are, you can indulge (somewhat anyway) in most of the things you wanted to do as a kid, but couldn't afford or were legally unable.

So, what's this got to do with 54's? How many of us played with plastic army guys in our childhood? I'm not talking about the GI Joe stuff, but rather the bags you could get at most every toy and Woolworth's in America (and even unlikely ones like some general pharmacies, and news agents). They were all pretty much 54's. The cool ones even had detachable equipment. A lot of stuff wasn't "scale" but our imaginations made up for most of that shortcoming.

(Yes, I know all about Britains, but on this side of the pond, they were expensive and found only in upscale toy stores. In the Boston suburb where I grew up, only the F. A. O. Schwartz in Boston and one or two of the major downtown department stores stocked them with regularity. For me, they were a rare Christmas gift.)

Now, they're still made of plastic, but the detail is excellent, and they paint up nicely. For those of us whose arms are no longer long enough to read a printed page in normal type without a pair of glasses, this has been a great development

So I say, let us rejoice in 54's and may their great deeds on the tabletop long continue. 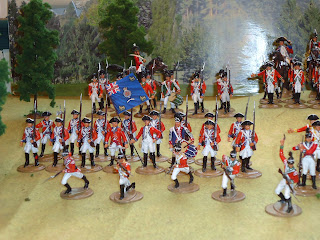 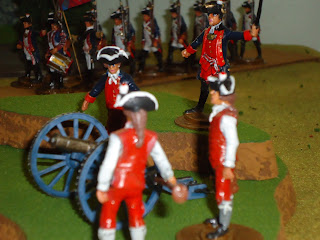 The British Are Coming!

In my last post, I showed some of the Hessians that I had painted up for the AWI. Today we have some British. The units are organized based on troop type and to a somewhat lesser degree, nationality. They have been used with rules such as a modified version of Charge!, All the Kings Men, and Honours of War.
Of the three, Charge! is my favorite--it just seems right for use with 54's.
Organization is very generic. Regular line are generally 16 figures, consisting of 12 rank and file, an officer commanding, drummer, standard bearer, and the RSM (he's the gentleman "counseling" the fellows in the second rank)
Grenadiers are somewhat smaller, with fewer command figures, and usually no standard bearer. Lights and militia are 6-8 figures with an officer and one other (a musician/NCO).
Guns generally have 4-6 crew depending on the size of the gun, i. e. light, medium, or heavy.