In my last post, I went over the map and OB to be used in this test of About Bonaparte. Let me expand that and describe the forces in a little more detail. Under the rules, troops are classified using the terms Green/Militia, Trained/Regular, Veteran, and Elite. Each of these is in turn assigned a point value per figure. Thus multiplying the number of figures in the unit (8 for infantry), we can arrive at the unit's value. Trained/ Regulars for example are 3 points per figure, or 24 points per unit. Veterans on the other hand are 5 points per figure, or 40 per unit. Theoretically then armies of equal points should be well-matched against each other.
Another key concept is the use of the specialized dice mentioned in the previous post. Flags are especially critical. Rolling one or more flags when firing on a unit will, depending on its training type, and can result in catastrophic failure of their morale, although various mitigations are in play. For example, Veterans can ignore the first flag thrown that turn. If an officer is attached (at extra points), even a second flag thrown could be ignored.
The picture on the left shows the American unit occupying the "unfriendly" side of the bridge. On the right in the woods are two skirmishers from the unit. The photo below shows the initial advance of the British.
According to the OHW scenario, the Americans (Blue) have crossed the river and have taken up their position. The unit is classified as Trained/Regular, and since it is a detachment from the main body, an officer has been attached in command. During the initial exchange of volleys (Blue) has fired. The roll of 4 dice 1-blank, 1-C, 2-F. The blank and the C caused no casualties (infantry targets require and "I"). But the two Flags...well normally, that would be another story. BUT, the British Light Infantry (Red) are Veterans, with an officer. Veterans can ignore the first flag, and the officer allows them to ignore the second.
Return fire from Red inflicted 2 casualties on the infantry.
Turn 2 saw the first reinforcement for Blue. Trundling across the bridge from the road, an American light (6 pdr.) iron gun took up position to the right of the Americans. Red was not scheduled for reinforcement this turn. Meanwhile, the British advanced and fired without effect. American return fire saw one skirmisher down.

The Americans had a space before more, and more deadly, British infantry entered the fray. Now luck turned against the British. Since the officer was attached to the lights, the gun needed an "A" roll to activate. It didn't. The Americans on the other hand did roll an "A", and the gun was able to deploy. But the Lights were game and advanced. But now, facing a gun, and an almost full unit. The firefight was one sided at best (rolling 3 flags, and an "I" certainly helped. the remaining 3 dice would turn out to be 2 blanks and a "C"). The British lights fell back
Well, we'll finish up here today. I'll be posting part 2 later in the week (at least, that's the plan).

Bridgehead: A One Hour Wargame

In my last post, I described a set of rules for battles with 54mm figures that appeared to be both comprehensive and fast.Written by Dirk Donvil and available from Caliver Books (Partizan Press), they are called About Bonaparte. In this installment and the following, I will report on a battle fought using these rules (with a couple of tweaks for the War of 1812). The scenario is drawn from One-Hour Wargames by Neil Thomas and is #5 Bridgehead. I copied the map although I enlarged it somewhat to an area of 4 feet by 3 feet (my dining area table is 5' by 3'). The map is shown below: 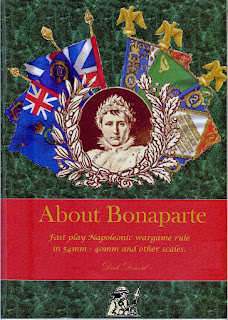 One of the things I like about OHW is the provision for randomly selecting the forces involved. By rolling a D6, players (or player--great for solo games) will be assigned if you will a force of between three and six units, depending on the scenario. This particular game required 6 units to a side. Rolling for result, the following were given:

Red Force (British) rolled a 5 on a D6 giving them a force of 4 infantry, 1 artillery, and 1 skirmisher.

Blue Force (Americans) rolled a 1, giving them a force of 3 infantry, 2 artillery, and 1 cavalry.

Further dice rolls determined when and where the troops would enter and initially deploy. This gave the American force 1infantry unit, north of the bridge and within 6 inches of it at the very start of the game. On Turn One, the British would roll to determine who comes on and where. Their result was two units (1 artillery, 1skirmisher) entering at point B. On turn Two, one blue unit would arrive at point D.

So, here we have it. But before finishing up for today, let me give you some of the tweaks I mentioned earlier. Under the rules, all of the British (after 1809) are considered Veteran troops and additionally have an officer attached (this is critical when your opponent rolls a "flag" on one of his/her dice). Americans are Regulars/Trained, and have an officer with every two units, leaving one dangling if a flag is rolled against it. Otherwise, each unit of non-skirmishers may deploy 1 figure as a skirmisher. I hold to this for the British whose organization (historically) included a Light Company. The Americans at the time followed along to a certain extent except the "elite" companies in American Regiments included 2 flank companies, both often lights, whereas the British had one light, and one grenadier company for its "flanks". Thus, I allow an American unit to deploy 2 figures in a skirmisher role.

Next time: The Battle! 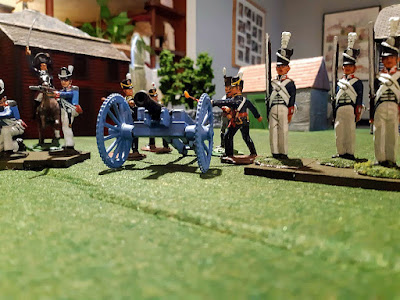 It's been a few months, but as we are now in high summer, and despite the fact that most of Massachusetts is open after the recent pandemic, the temperature outside would indicate that some inside (air conditioned) activities might be warranted. In my last post I wrote about my original interest, later revived, in the War of 1812 (as it is known here). In perusing the net, I came across a blog I would highly recommend:PMCD-Mobilisatie

This group seems to specialize in 54mm wargames and although located in Belgium (Flanders), most of the postings are translated to English. The photos and postings are well-done. Check it out if you get a chance.

Now, one of the issues that seems to be more common with 54's than other scales is a lack of rules that both provide a satisfactory game and can accommodate lots of troops. In perusing the pmcd-mobilisatie postings, there was mention of a set of Napoleonic rules that they used called About Bonaparte by Dirk Donvil and available through Partizan Press (Caliver Books ). I think they may fit the bill very well! As much as I enjoy Charge! and All the King's Men (ATKM), they have their drawbacks. In the case of  Charge!, large units and rules that can be, and often are, a bit confusing. Having no quick access or summary sheets certainly doesn't help. ATKM is straight forward, but the use of large amounts of dice and colored status markers does tend to slow things down.

About Napoleon is promoted as fast play, and I think that is true. Units are eight figures on 4-6 stands. The dice are customized, marked by having I (infantry), A (artillery), C (cavalry), F (flag), along with a blank side. Still, I was able to purchase a dozen blank dice on line easily, and marking the letters with permanent markers took only a few minutes. The rules for movement, command, firing, and contact (melee) are straight forward. They are fairly comprehensive and include sections on national characteristics, a simple set of campaign rules, as well as specific rules for other musket era wars including FIW, AWI, ACW, (even nineteenth century colonial wars!)

Now, I was skeptical that Napoleonic warfare could be represented well with such small units and in such a large scale, but I was, happily, wrong. I've included some photos of my War of 1812 Americans and British.The figures are both AIP and ATKM. They are organized for the About Bonaparte  rules. More next time! 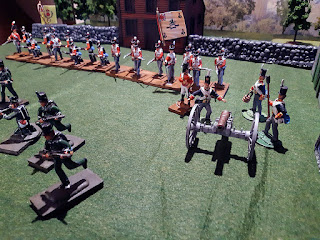 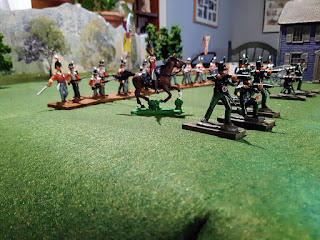 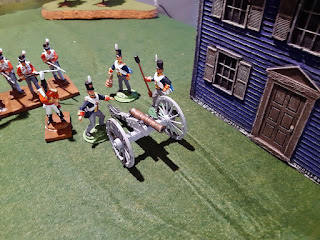