This year I made a promise to myself to try to publish at least one post in Der Resin Kavalier, every month. Well, today being the last day of September, it's publish or perish (well, no, not really). Why Spain or even Italy for that matter (the Battle of Maida is coming up!)? First and foremost: the British Army is all painted, based, and organized for battle using the About Bonaparte rules by  Dirk Donvil. A couple of boxes of AIP's  Napoleonic "2nd Foreign Regiment Chasseur -1810" (Set #5803) provided the French Line (and Lights, with a slight ignoring of the long-tailed coats). Some trimming required! So for the past few weeks, painting has occurred (more than usual, I might add). More to the point however, is that Napoleonics has always been my first love in this hobby...even more than AWI.

My normal routine when I am beginning to paint in a new era or scale is to do a series of what I call "master figures" -- prototypes for how I would want the rest to turn out. Fortunately, being units of usually no more than eight figures, this seems to work: more exacting on the first figure, somewhat less as short-cuts become apparent. So today, I present a few pictures of  the combatants!

The first is a British Highlander, probably an old Airfix, that was given to me by my friend Ross a couple of years ago at Huzzah (along with about a dozen or so companions). 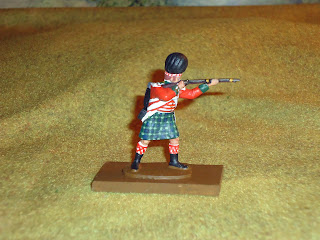 Next couple are those AIP figures I mentioned in the first paragraph. They've been painted as both light and line infantry. 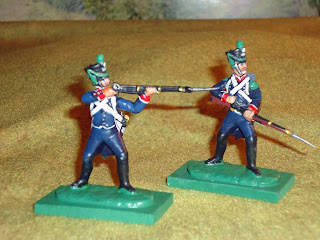 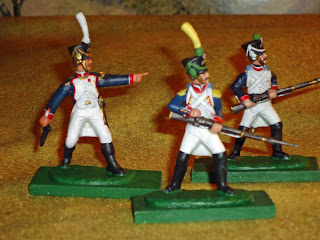 Next, to add dignity to what would otherwise be a vulgar brawl, here is the first battery of the French artillery.  These are AIP. 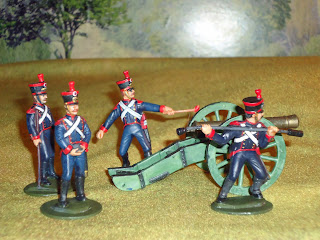 They are followed by some Wurtemberg Infantry (HaT). Who would go to Spain without allies? 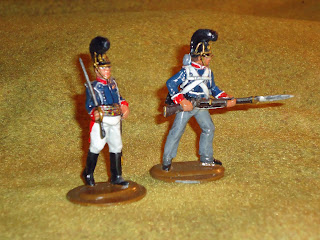 Finally, we have a dragoon that I think is A Call to Arms figure. I lost the original container that was their shipping package. He is a bit slighter in build than the AIP characters but the animation more than makes up for it! 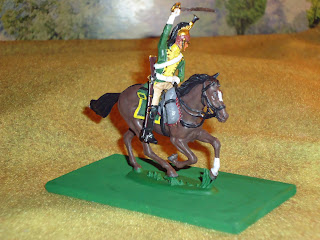