A Look at the Rules

Following my last post, I re-read the rules, About Bonaparte, and compared my experience with what the rules state and the reality of the game. As I mentioned in an earlier post, the scenario was taken from One Hour Wargames with the troops selected from the mechanism described in that book (a D6). Each side had six units with the Americans having a more balanced tactical force of 3 infantry units, 2 artillery, and a unit of light dragoons. The British on the other hand ended up with 4 infantry units, 1 artillery, and 1 skirmisher unit. Typical of a Napoleonic battle? Not by a long shot, but certainly plausible for a War of 1812 scenario. As is typical with many of the scenarios in OHW, units arrived on different turns and different locations. 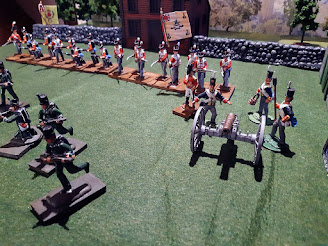 The mechanics of the rules were not out of the ordinary, save for the use of special dice, Movement and ranges were given in centimetres although those who are less than enamored with the metric system will find conversions to more familiar inches right alongside. Ranges did seem a bit short, although movement distances just seemed to work. The rules about support need to be read at least twice as well as the rules for "contact" (melee). The effects of "Flag" dice with their effects (and exceptions!) definitely require a read or two.

Command and control was a bit confusing at first. A number of dice needed to be thrown to activate the unit or group. That number varied depending on whether the general was present, his aides, and unassigned officers in his entourage. But after a turn or two, it becomes almost intuitive. The game went along as reported in my previous installment with only a few hitches and I think the rules are something I will definitely use.

My biggest complaint is the section on national differences. Throwing a Flag against a unit during fire or melee result (normally) in compulsory moves. For example, let say you roll four dice for fire and assume the roll ends up 1-Blank, 1-C, 1-I, and 1-F. If the target is regular infantry, the result would be one figure (I), and a 20 cm withdrawal facing the enemy. The Blank and the C(avalry) would not count. All well and good, all pretty straight forward. Unless the target is British! According to the rules, British after 1809 are considered veterans (ignore the first flag), an Officer figure must be in place with each British unit (ignore the second flag). If they were "supported", they could ignore even the third flag (if it were thrown). Most any other unit would retreat 40 cm, backs toward the enemy on the second flag! If a third flag were thrown, the unit would rout off the board.

My point is British infantry are incredibly difficult to force back, let alone rout. If they happened to be elite (British Guards), they would be forced to practically die to a man! The national characteristics definitely need to be adjusted, especially those units assigned to North America in 1812-13. 1814, however, would be another story! 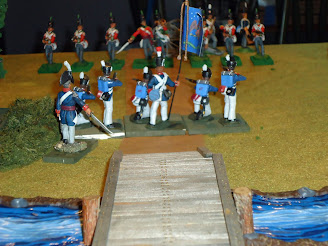 Things were now beginning to heat up on both sides of the bridgehead. As the artillery on both sides deployed, casualties began to mount. More to the point, the turn saw the British reinforcements arrive from the east (point C on map). Two battalions of veteran line now supported the rallied skirmishers and artillery. But, like so many things in life, fate or fortune has a way of short circuiting the best looking plans.
The British gun was having some problems: first, it was unable to move initially (no "A"s came up), compounded by the inability to roll any useful hits on the American line. The American artillery, having taken up position on the flank of the bridgehead unit, was raising a fair bit of angst on the British line.
As my friends in the artillery used to remind us poor grunts (what now seems a thousand years ago) "Artillery adds dignity to what otherwise would be a vulgar brawl."
The Americans shifted their line somewhat, with the original unit moving into the woods as the newly arrived unit with the Brigadier, the well-traveled, ill-famed, but always available, Bloodnock. As the firefight became general, the Americans now began to feel the weight of British ire. Their firepower knocked out one gunner, but the two flags that accompanied that roll proved too much for the hard-pressed gun, and the crew routed. With their flank exposed to a British assault, things were decidedly dicey.
Fortunately, the second American gun arrived and deployed on the American side of the river. With the range shortening (and a few lucky die rolls) the situation stabilized enough for the third and final American infantry unit to get into position. A near run thing, but now casualties began to mount on the British line as both musketry and artillery took their toll. One regiment fell back, still another began to weaken.

More British arrived, stabilizing the situation. A rough parity began to appear: both sides had 2 combat effective infantry units (the Americans in the woods ultimately retreated) both sides had guns in the fray... Stalemate...or victory? As it turned out, the battle had stabilized. The British 10th and 54th Foot (yellow and green standards) ultimately were force to retire. But in their stead, the  3rd KORR, and 4th (The Buffs) manned the line. At that point with the lines now engaged in a battle of attrition, the game was called without protest (easily done when playing solo).

With the final arrival of the light dragoons, again living up to their motto "denique nuper denario diurno", it was still up in the air as to the ultimate victor.

So, how did the rules play out? Well, my opinion will have to wait until next time. But until then, check out this link: Dale's Wargames .