Recruiting a 54mm Army (Part 6), or,
Sometimes you just need to improvise!

In the last installment, I took a look at Armies in Plastic (AIP) American Revolution Cavalry. Unlike some of their other sets this one's interpretation of light cavalry in the AMR (or AWI) is problematic. There are only five figures in the set: one officer, one bugler, two swordsmen, and some fool shooting his carbine, possibly at a circled wagon train. Now, granted these are toy soldiers and not specifically designed for collecting or gaming, but carbines were rare during the AMR, at least among the Americans. As for the tricorns they are wearing, few units, militia or otherwise, wore such headgear. The only exception I am aware of was the Connecticut Light Horse.

So what to do? Slice and improvise! The pictures below show this same basic AIP unit with new headgear and arms (literally) to give a better impression of American Light Cavalry. The heads and some of the arms are extras I purchased from All the Kings Men, now sadly out of business. Other arms were just cut off and swapped, and the seams filled with modeling putty as necessary.

I did find another source, however. Irregular Miniatures (irregularminiatures.co.uk) offers an extensive line of 54mm parts, headgear, and figures. I have not done business with them, but it might be something worth looking into. As always, I welcome your comments! 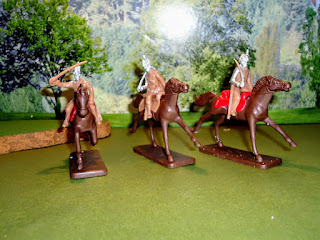 It's been awhile since I last sat down to write another edition of Der Resin Kavalier. Some might offer an excuse, but I'm retired, I don't need one. It has been a busy late summer and fall, and with Christmas only about two weeks away, I thought it was probably time to publish 'something'. So here we are, writing about finishing up your army with the cavalry.

First off, I hate painting horses. Back in the day, I convinced my eldest that painting horses was fun--just slap on some shade of brown paint. Give it a black tail and mane. Finish up with a green base, and it's done: ready to glue one of Daddy's toy soldiers on it. Back then, of course, Scruby figures were the most widely available, so highly detailed models was more dependent on the painter than the sculptor.  British figures, such as Minifigs or Hinchcliffe were few and far between on this side of the pond.

I've talked about figures for war gaming the American Revolution (AMR) in 54mm in my earlier posts for this series. Some of the figures are quite detailed and paint up well. When it comes to infantry or artillery, there is a lot out there and a wide variation of price points. Sadly, with regard to cavalry, there's not much. But there is an answer: conversion. And just like Airfix figures were converted into a myriad of different types and armies in the past, we can do the same thing and we're going to use my favorite candidates, Armies in Plastic (AIP).

Below is the basic AIP American Revolution Cavalry set, in this case Militia. But like all the AIP sets, the same figures are used with other sets, only the color of the plastic changes. In this case, militia is molded in brown. French on the other hand would be the same figures, but in white plastic; British red, and Americans in dark blue. There are five figures in each set, none of whom looks much like a historical AMR light cavalry figure. One of which, the fellow firing his carbine, is probably next to useless in an AMR context. Next time, I'll show you some modifications to increase both their usefulness and accuracy. 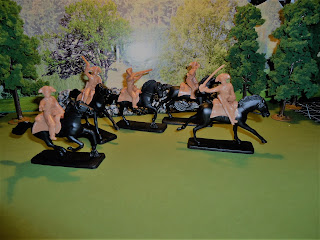