Sometimes, You just need a Change

Many years ago, when Jack Scruby's miniatures were state of the art, and Donald Featherstone's Wargamers' Newsletter was the magazine to read on the hobby, I discovered the War of 1812. Scruby carried a line of 30mm figures both American and British. At the time, the late 60's, my friend Tom and I were just discovering that there were actual rules available, and we could use them to fight battles! The rest, as one might say, is history.

Flash forward fifty plus years: Tom and I, along with other members of our club, still meet and game on a regular basis, at least until recently. With the COVID-19 pandemic, such things are put in abeyance, hopefully soon to resume our normal daily pursuits. Yet it did rekindle my interest in the War of 1812...and painting figures for future battles in better times. 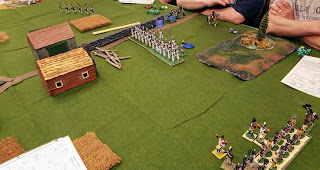 For those who have read my musings over the last couple of years, know that the AWI and 54mm figures are pretty much all I write about. But sitting at home, only going out for a daily walk or trip to the supermarket, does tend to concentrate one's mind. This renaissance for 1812 began a few years back when I discovered Ken Cliffe's company and his 54mm figures, now sadly no longer in production and sorely missed. I still have some of his 1812 line waiting, like so many others, for the brush.

Next time I'll go into more detail and discussion, but for now I will leave you with some photos from a game I put on at Huzzah 2016. I don't remember the outcome, but everyone seemed to have a good time.
Posted by Alan Coughlin at 2:15 PM 2 comments: