A Look at LOD Militia

In the last iteration of this blog, I discussed the figures produced by LOD (see link from previous post), focusing on the Continental Light Infantry. Today I would like to take a look at their Militia.
As far as I know, only two manufacturers produce figures specifically as militia: LOD (which we'll look at today) and IMEX, (which I will do if there is any interest).

Some of the IMEX militia can be seen in action in my posts from Huzzah! 2019 this past May. Both lines look sufficiently militia like, although their dress favors the Northern Colonies as they are for the most part too heavily clothed for the Deep South.

Like the Light Infantry, their animation is top notch. As I stated in the previous post, if you are one who wants a unit all looking the same, be prepared to buy several bags! If you are in to small unit actions, these are the figures you would want! Not only are the poses well-executed, but the facial expressions add to their quality. Several of these guys I would not want to meet in a dark alley! (Metaphorically speaking, of course).

The plastic used is a semi-hard material, more rigid that either IMEX or AIP (Armies in Plastic), and as such require very little prep prior to priming and painting. On occasion, I have found mold release lines that just have to be removed, but for the most part, these are cleanly molded figures. I would also add that it would be a good idea to anneal the plastic to reduce the inevitable curves found most plastic figures (bent musket anyone?). Heating them in very hot water and then allowing them to cool slowly should help. An electric hair dryer might also be useful instead. After priming with your favorite compatible primer, just paint them as you normally would. A protective coat of matte or gloss varnish, depending on your preference should be the last step. 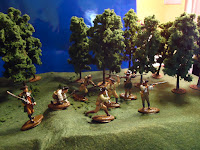 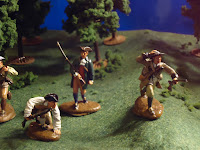 This one above shows 7 of the 8 poses included (a kneeling and firing militiaman is the eighth. The middle one is a closer view of my three favorite poses. Finally, the below photo shows two of the Continentals, not my best photo work, but you get the idea.

With Christmas and New Years just around the corner, this will be the last post for 2019. May you and yours have a wonderful holiday. Maybe, just maybe, 2020 will see the peace and hope this season promises! 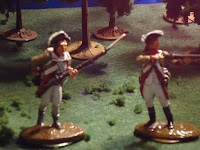